You can scroll the shelf using ← and → keys

Glam! The Performance of Style

I think perhaps the invite arrived inadvertantly, but I wasn’t going to pass up the opportunity to attend the press preview of Tate Liverpool’s new exhibition Glam! The Performance of Style. I had sat in on a research event back in the Autumn last year, where I listened to some prickly debates about whether or not it was going to be appropriate to curate both fine art and pop music. I left that event a little concerned, but I needn’t have worried. The exhibition makes for both a sophisticated and lively blend of media, domains and tensions; without pandering to the spectacle of nostalgia (it will be interesting to see if the V&A’s forthcoming David Bowie Is can achieved something similar).

On entering the gallery I adjusted to the shocking pink walls adorned with a range of 1970s ephemera and glittery costumes. Somewhere in the distance yowled Bowie, and all around was the light clatter of technicians busily setting right various displays and finalising wall texts. The exhibition’s curator, Darren Pih, admitted to being a little stressed, yet displayed nothing of the sort. We talked briefly of a glorious Jarman super-eight encountered in the first room, which immediately calibrates the subtle intentions of the exhibition as a whole. 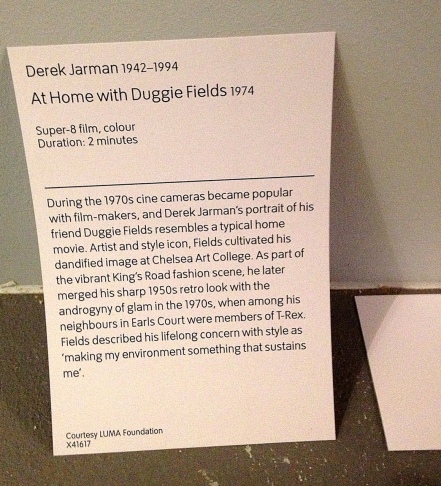 Our conversation was cut short, with Pih fielding a series of interviews to camera. His recurring refrain as he explained the collection again and again was how Glam marks the emergence of a convergence culture. Perhaps we take that culture for granted today. Indeed, the exhibition reveals a dynamic, edgy interdisciplinarity that today is shorn of such intensity. As Pih notes:

…historians have increasingly identified blind spots in the traditional narrative that posits 1970s Britain as experiencing a post-1960s hangover, locked in socio-economic declinism, a society hamstrung by industrial disputes. If 1970s Britain was such a dead-end, how was it able to produce such vibrancy of pop music, film and fashion? Why have its styles and tastes been repeatedly revived, continuing to find purchase in the contemporary imagination? (Darren Pih, Glam: The Performance of Style, 2013, p.9)

A key consideration of the exhibition is the growing confidence of the British art school from the 1950s, which we can trace through to the developing pop scene, epitomised by the likes of Bowie and Roxy Music:

Art students’ openness to the relevance of all creative experience led to a promiscuous intermingling of ideas and ideals across the disciplines of fashion, design and applied arts, fine art and pop music. Richard Hamilton’s Swingeing London 67 (f) 1968-9 is emblematic of this coming together, through its appropriation of a mediated image of the gallerist Robert Fraser handcuffed to Mick Jagger following their appearance in court on drugs charges. The era’s liberal art-informed ambience also fuelled the imagination of David Bowie, who followed a curriculum infused with art and graphic design at Bromley Technical College. In 1969 Bowie also co-founded the Bechenham Arts Lab, a centre hosting artists’ studios, poetry readings, light shows and theatrical and dance performances. (Darren Pih, Glam: The Performance of Style, 2013, p.19)

It isn’t simply that fine art informed other areas of practice. Glam as ‘convergence culture’ was genuinely the experience of convergence, or perhaps more appropriately divergence; shifting the very locus of art well beyond its known parameters, so making this exhibition (in a gallery) ever more challenging and significant.

Coolly and quietly walking through the rooms during the preview was the critic Paul Morley. His appreciation of Glam is known to anyone who has read his music journalism (or more recently his book Words and Music). He was there as part of the BBC’s Review team, and sure enough the following evening appeared on TV along with the show’s presenter, Martha Kearney. The two of them initially joked about the opening room looking exactly like their teenage bedrooms. It is clear the exhibition tugs on the heart strings of anyone who lived through the period. Morley has always been an incisive critic of nostalgic obsessions, particularly within the domain of pop culture and music. Yet, in speaking of this examination of Glam, he was keen to acknowledge its intellectual approach.

My TV set was still black and white when Glam came to dominate Top of the Pops, but that did nothing to prevent the colours shining through. I vividly recall having to change channels with a dial not a switch, yet I must admit Glam was – if not such a distance experience – always only a vicarious thrill. From where I stood, Glam was all about transgression (even if I didn’t know such a word then). Like punk, which was to follow, Glam was the manifestation of a contest not in overtly political terms, but in cultural, aesthetic forms. Yet, unlike punk, the transgressions of Glam were not rebarbative, but about new and alternative forms of beauty, pleasure and ambiguity. What was deeply satisfying upon entering the exhibition, I found myself still confronted with such transgressions. That’s what makes its curation so important.

Glam! at Tate Liverpool: through a mirrorball darkly